“The people in Sweden love Israel.”

A delegation of 7 members of the Christian organization Shalom över Israel in Sweden embarked on a mission to Israel. The first thing they did was to plant oak trees in the Tzora Forest near Beit Shemesh. “One of our organization’s goals is to support tree planting in Israel”, said Shalom över Israel chairman Stefan Sturessom. 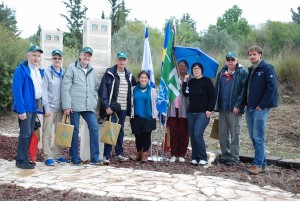 The Shalom over Israel delegation at the Park Sweden donor recognition site in the Tzora Forest. Photo by Dennis Zinn 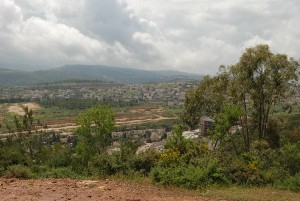 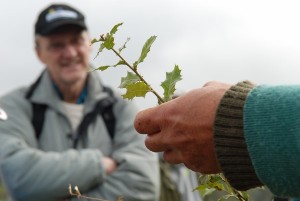 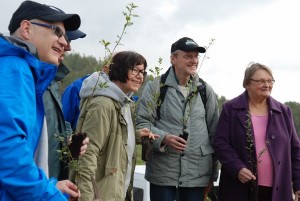 The ‘Shalom over Israel’ delegation with their Oak saplings in Tzora Forest. Photo by Dennis Zinn 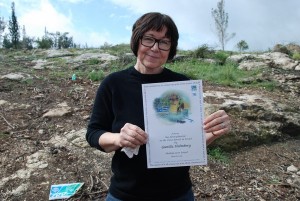 Seven members of the Swedish Christian organization Shalom över Israel arrived in Israel to demonstrate their support for the country and its people. On their first morning, accompanied by Moria Gilbert of KKL-JNF’s European desk and sporadic rain showers, they arrived at the Tzora Forest near Beit Shemesh to take part in a KKL-JNF tree planting ceremony.

Leading the delegation was Shalom över Israel’s chairman, Stefan Sturessom, who said that this event was high up on the tour agenda. “One of our organization’s goals is to support tree planting in Israel. Shalom över Israel’s mission is: to champion the state of Israel, to spread knowledge about Christian roots in Jewish history and religion, and to foster good and meaningful relations between members of our two faiths. Shalom över Israel was established over 80 years ago and we have thousands of subscribers throughout Sweden.”

The participants were met and warmly welcomed by KKL-JNF forester Eran Zabadi. They were thrilled to hear that the forest is also known as ‘The President’s Forest’ as it was dedicated to Chaim Weizmann, Israel’s first president. Zabadi told them that although this is the end of the planting season, they will still be able to plant trees because KKL-JNF has prepared a special site which creates conditions for perennial planting. He said “Today we are lucky that it is raining but we recently experienced very hot dry weather! Unlike Sweden, Israel has an average of only 60 days of rain per year, severely limiting the number of days for planting trees. In order to overcome this obstacle we created an irrigation system that uses ground water and runs through the pipes that you see here.” He then handed each participant an oak sapling and a pick and led them to the planting site. He advised them to return in 150 years to see what magnificent trees they planted.

Group participant, Gunilla Holmberg, exclaimed: “this is the third tree that I have planted in the last few months! The two others were apple trees in my garden in the north of Sweden. I love nature but it is even more meaningful to plant a tree in Israel. I thought it would be special and it truly is so.”

The visitors then visited the Park Sweden section of the Tzora Forest. Shalom över Israel secretary Bengt Berggren, explained that Swedish citizens donated money for the establishment and maintenance of the site. “Besides supporting KKL-JNF, Shalom över Israel donates to WIZO, Shaarei Zedek Hospital, The Jaffa Institute for Children at Risk, and the Bible Society in Jerusalem.”

The editor of the Shalom över Israel monthly magazine, Lief Lundberg, was constantly taking notes and pictures. He said: “we write about our love for Israel, and the connection between Jews and Christianity. The people in Sweden love Israel.” When asked about reports of anti-Israel feelings in Sweden, he said: “Much of the anti-Israel noise is made by a few rowdy citizens, some politicians in parliament, and most of the media.”

In the lecture hall at the KKL-JNF offices in Eshtaol, Johannes Guagnin, coordinator for research and foreign relations in the KKL-JNF forestry department, gave the group a historical survey of farming and tree cultivation in the Holy Land. He described how techniques for desert agriculture developed by the ancient Nabateans have been adopted today by KKL-JNF to maintain tree growth. “The method is to dig a large shallow pool in the earth around a tree trunk. Known as a liman, it traps and collects ground water for each particular tree.”

On the walk back to the bus, the visitors took the time to enjoy the scenery and take more pictures. Berith Stahl, who is an avid gardener at her home in Stockholm, was particularly interested in the tiny Rakefet flowers (Cyclamen) growing alongside the path and in rocks. “We have these in Sweden” she said, “but they are enormous. These little ones are everywhere here and beautiful.” Berith was keen to emphasize that her name means ‘covenant’ in Hebrew.

Before leaving the dedication site, Shalom över Israel chairman Stefan Sturessom revealed that he had had an important meeting the next day with the head of El Al in Tel Aviv. “We are making every effort to ensure that the Israeli airline will resume flights to our country. El Al stopped flying to Sweden over 10 years ago due to security concerns at Stockholm airport. We are now mediating between the airline and other airports in Sweden that are willing to meet El Al requirements.”