Forest grove planted in Ruhama, in memory of children murdered in the Holocaust

On Tuesday, March 15, a new forest grove in Ruhama Forest in the Western Negev was planted by Russian-speaking Holocaust survivors in memory of the one and a half million Jewish children who were murdered during the Holocaust. 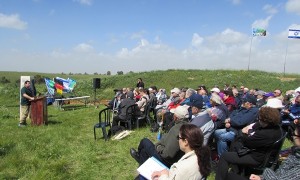 The ceremony in Ruhama Forest inaugurating the new grove in memory of children who perished in the Holocaust. Photo by Tania Susskind 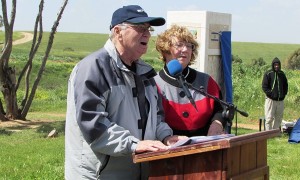 A Holocaust survivor recites the Kaddish prayer for the children who were murdered by the Nazis. Photo by Tania Susskind 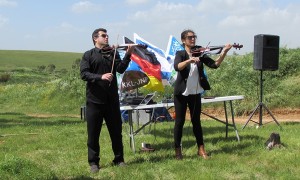 Violin tribute for the children who perished in the Holocaust. Photo by Tania Susskind 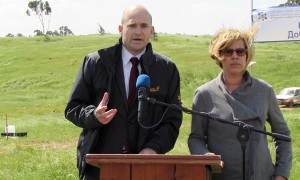 Kord Muller, the General Consul of Germany, speaks at the forest grove inauguration ceremony in Ruhama. Photo by Tania Susskind 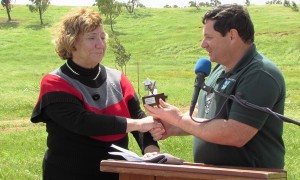 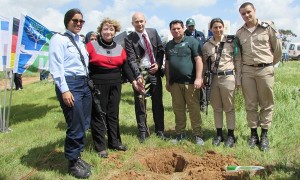 Ceremonial planting of the first trees in the memorial grove for the 1.5 million children who were murdered in the Holocaust. Photo by Tania Susskind 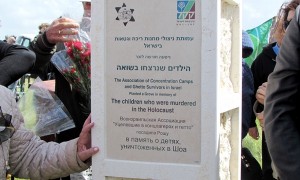 Unveiling the commemorative plaque at the memorial grove for the 1.5 million children who were murdered in the Holocaust. Photo by Tania Susskind 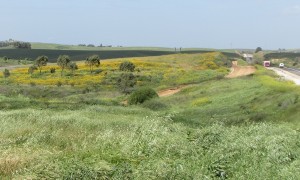 A view of the Ruhama badlands in the western Negev, where the memorial grove for the children who pershied in the Holocaust is situated. Photo by Tania Susskind

“One and a half million Jewish children were murdered in the Holocaust. They were not privileged to immigrate to the Land of Israel and plant trees. We are doing it instead of them. May these trees live, grow and thrive,” said Ms. Gita Kaufman, chair of the Association of Concentration Camps and Ghetto Survivors in Israel in her address to about 60 Russian-speaking Holocaust survivors who gathered at Ruhama Forest to plant trees in memory of the children who were murdered in the Holocaust.

“Although the Holocaust took place seventy years ago,” Gita continued, “there are still no words or language that can contain the horror. Six million people were murdered only because they were Jews. The children in the death camps wrote letters to their parents and family. An eleven year-old boy named Siegfried Rappaport wrote his mother: ‘Mommy, don’t worry about me, I am fine. I am afraid that you don’t have bread to eat. When we were three, you, me and daddy, life was so much better. As soon as I have bread, you know that I will send it to you, I know how to manage without it.’ Siegfried was murdered by the Nazis in 1945.”

Gita asked the audience to rise for a moment of silence in memory of the children, after which Kaddish was read by one of the survivors. She then called on Mr. Kord Muller, the General Consul of Germany, to speak.
“I was born in Germany in 1974,” the Consul said, “and like all the German children my age, we learned about the Holocaust in school. As a child, it sounded to me like a lot of numbers, something almost theoretical. When I came to Israel four months ago, everything suddenly became only too real. I met people like you, people who actually experienced these horrors seventy years ago. For the sake of my generation and future generations, we must keep the memory of the Holocaust alive, not only here in Israel. Today, Germany and Israel have very close relations. Germany is grateful that the Israeli people reach out to us and are willing to cooperate with us. I personally am grateful to be here today and to remember the children together with you.”

Mr. Igal Yasinov, head of KKL-JNF’s Russian desk, said that this site had been chosen for the new forest grove “because the new forest that is being planted in memory of the children will eventually connect with the KKL-JNF forest that was planted in honor of the Zionist youth movements. This connection symbolizes life and growth in the face of death and destruction. Most of you were children during the Holocaust, and seeing you here in Israel planting trees in memory of the children who didn’t survive makes this one of the most important and moving ceremonies I have ever attended in my entire life.” Mr. Yasinov also conveyed the greetings of KKL-JNF Vice Chairman Zeev Noyman to the audience.

Speaker of the Knesset MK Yuli Edelstein also sent his greetings to the ceremony. “The martyrs who were murdered in the Holocaust are no longer with us. All we can do is remember them and plant green, vibrant trees in their memory. Thanks to the miracle of the state of Israel, the people of Israel lives!”

As KKL-JNF Forester Elisha Shahar explained, Ruhama Forest is part of KKL-JNF’s internationally acclaimed desert afforestation project. Much of the Negev Desert lacked vegetation due to processes of desertification caused by human misuse of natural resources. With the help of its friends worldwide, KKL-JNF is restoring greenery to this region in a manner that is harmonious with the region’s natural eco-system. KKL-JNF also coordinates with Bedouin shepherds who will graze their flocks in the new forest, which reduces the danger of fires.

Alex Selsky, a member of the Board of Governors of the Jewish Agency and CEO of the World Yisrael Beytenu Movement, was responsible for connecting Gita with KKL-JNF. “Bringing life to the Negev, which is what you are doing today, is exactly what needs to be done. When Gita asked me for assistance in creating a project to commemorate the children who were killed in the Holocaust, I immediately told her that KKL-JNF has both the will and the capability to do this in the most honorable and appropriate manner. Developing Israel and making it strong is the only way to ensure that another Holocaust will never happen.”

Roman Barmanik, CEO of the Association of Concentration Camps and Ghetto Survivors in Israel, was very emotional as he described his experiences during the Holocaust. “It was not only Germany, there were so many other countries that took part in the Holocaust, and refused to allow Jewish refugees to enter their borders during the war, sending them back to the concentration camps. We who remained alive have a mission, which is to tell our terrible story to the next generation. The new forest grove ensures that the memory of the one and a half million children who were murdered will never be forgotten.”